I’ve been a Spyro fan for a few years now and embraced Skylanders when it was released last year. A year on, and it was another Skylander’s game release – Skylander Giants.

We were lucky enough to be sent a game to review and review it my son and I have both done.

His point of view

Very good puzzle game with being able to move things around so that you can get to the next stage.

I love the fact that they have Skystones. I’d love a real Skystones game.

I like the story and especially the end. I like having to find Kaos (the baddy) and seeing the mischief he gets up to (I’m a bit appalled that he has finished the game just because it means I let him spend a while in front of it, but it is easy to get to the end without having found all the areas and therefore only completing about 30% of the game. If he gets any new characters he will go back and play it more).

I’m not so keen on having two versions of the some characters for the first Skylanders and Skylander Giants.

The Skylander Giants are pretty darn cool! Because they’re big and can lift certain items that others can’t, and do way more damage.

I also like the cards that come with the game.

I have actually played it and I enjoy it. I’ve found defeating the ‘bosses’ easier so far than I did the first game which I like because I get impatient when things are too hard and get my son to come and help me out. That’s a bit hard when he’s asleep.

I also like the Skystones game aspect within Skylander Giants.

I also like the puzzle aspects of the game. As well as moving things around to get to other levels, there’s finding different areas to find treasure chests and so on. There’s the hero challenges too.

I like that you can use the Skylander characters on Skylander Giants and it’s good that the money I spent on those characters is being put to use on this game without having to fork out heaps more for the new characters. The upgrades they earned in the first game are also recognised in Giants.

The new characters in Skylander Giants

The game features 16 new characters, led by eight Giant Skylanders, who are twice the size of their comrades. The Giants each have exciting new powers and abilities to match their size.  Joining the Giants are eight new classic-sized Skylanders, who also feature never-before-seen powers. Additionally, Skylanders Giants introduces new LightCore Skylanders that glow when on or near the Portal of Power—no batteries required. Fan-favorites from Skylanders Spyro’s Adventure return as Series 2 characters featuring an all new “Wow Pow” upgrade power as well as the choice of more than one upgrade path.

I’ve got three prizes for three winners that I’m giving away courtesy of Activision (images below of single characters aren’t necessarily what’s being given away). 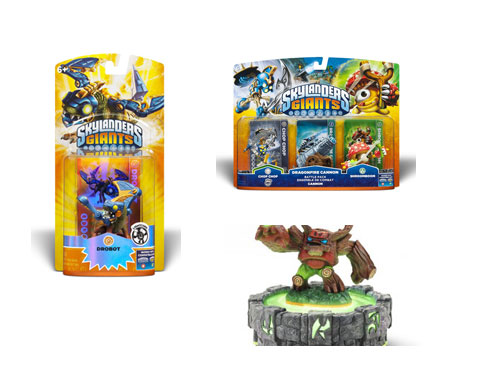 Comment on this post to enter by finishing this sentence: I want to add to my Skylander character arsenal because……

Thank you, and good luck.

My son and I chose these three winners. I will contact via email to notify them and if I don’t hear back from them by the end of Friday 30 November we’ll choose another. Rechose No 3 as they didn’t get back to me. (1 Dec)