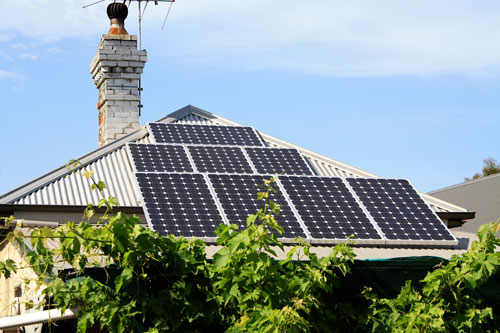 In my full-on-nest of full-on weeks a month or so ago I finally decided which solar panels I was going to get. I’d been sitting on it for a while because it was a largish financial decision for me to make and I had to wade my way through sales pitches, advice from friends and relevant reading matter.

A few months prior to that I applied for the federal government rebate to get grid-connected solar panels and the approval came through. Unfortunately this rebate no longer exists so I’m quite lucky I got in in time. These are some of things that delayed my decision.

I’d been recommended a solar company by a colleague and I went to have a look at their setup and it was pretty impressive. After talking with him I decided to go with the cyrstalline – smaller – panels incase I want to expand. To use the thin film panels it takes up a lot more room and you need a large roof to accommodate them. I have a reasonable amount of roof space but I wouldn’t get that much from them on the north facing part.

You can see from the photo above that I’ve got eight panels. If I’d gone for the equivalent thin film panels where you need more to get the same bang for your buck then I honestly don’t think they’d have all fitted on this north facing part of my roof.

On my travels around the neighbourhoods looking at peoples rooves I could see where they’d gone the thin film solar panel path and they do take up a lot of room. What finally decided it for me was that I thought if I want to expand the system, or put solar hot water in then if I got the thin film panels I’d really be limiting what I could do in the future.

With the setup I’ve got I’ve got the option of adding four more panels but I think what I’ve got will more than cover our electricity usage.

I had a dream last night that I received a bill for $228 for electricity and I that was quite reasonable even with solar panels. That’s rubbish because I never received a bill for that much without solar panels. But perhaps it’s not so rubbish because electricity prices could quite easily go up significantly – well that’s what some reports say. I did receive an electricity bill one week after these were installed so I’m actually looking forward to my next bill because I think I’ll be in credit.

The sun’s beating down today as spring has completely passed us by and summer has arrived so those solar panels are hard at work and we can see from the inverter how many watts are being collected.

Now, if I could just sort out my reliance on mains water!

If you’ve got any questions or comments about your experiences I’d love to hear them.