Last year my favourite handbag bit the dust. I’d bought it for nine pounds when I was in England in the early 90s and it just couldn’t be fixed this time. It was a satchel type bag, very sturdy black leather and I loved it. I bought a new handbag, another leather one. It cost a lot more and it already needs fixing because I probably cram a bit too much in, but an every day handbag should last the distance I think.

When I was shopping for this replacement bag, I found it really hard to find a bag that I could sling over my shoulder. Most handbags around these days only have short straps, but I like to have my hands free, not battle with a bag that falls off my shoulder. My new handbag is also lined with a fabric that is dirty now and I won’t be able to clean it. And the fabric is pilling which I don’t really like.

Yesterday I was in a shop that sells handmade stuff and saw these handbags that I just fell in love with and I’m totally going to buy one. It’s my birthday soon so what a perfect excuse I have.

The straps are adjustable and everything looks really sturdy and funky. There’s little pockets which are handy for phones and the like and you can choose a different fabric for the front bit. Go have a look at the website and see for yourself. 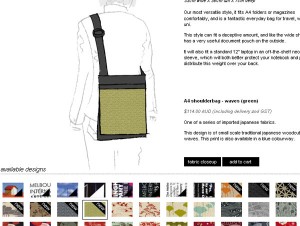 I’m not being incentivised to say this, but I wouldn’t say no to trying out one to keep of course.

It’s been a while since I’ve shared some others’ blog posts that resonated with me. Here goes:

There you have it. I’m now off to start an assignment.

For those of you who use Flickr you may have noticed that you can elect to use their new homepage design. I did and I like it. (Click on image above to see larger screengrab.)

At a glance I can see everything I immediately look for when using Flickr. I like the recent activity from comments I’ve made and comments others have made on my photostream. I sometimes forget to go and reply to comments so it’s good to have this upfront. It’s possible to mute this activity too if there’s a lot of activity you’re not interested in.

The stats graph is right there too and being a sometimes stats junkie this is very gratifying. I noticed a big spike in my views yesterday. I think some work could still be done on the stats themselves but maybe this will happen next. So while I could see a big stats bleep (not reflected in this screengrab) I don’t really know where the views came from as many of the views were for my photostream and not individual photos.

As before the contacts’ latest photos are available, and now so is the activity of the groups you’re in.

As an RSS subscriber to the Flickr blog I’d like to free this real estate up on the Flickr homepage for me, but that’s not an option.

Overall though, I like the new redesign. Oh, and I also renewed my Pro membership and took advantage of the extra three months free option (available until 30 September). This is me up one of my favourite climbing trees. Mum’s always taking photos of me, and psst – don’t tell anyone, but I kind of like it. (Mum’s already used this one on her website so perhaps she’s just not taking enough photos of me).

When mum took this we’d just been to see my cousin in the hospital and I tried to tease her but she was a bit too sick to be teased and mum told me to stop. She’s been in hospital for about two weeks now and mum said to say that so far all the tests she’s had done have come back clear.

When I’m not climbing trees I’m usually running around doing something. I don’t sit too still for long, but when I do want a bit of quiet time I like playing with my stretchy plastic lizards or my fluffy penguin.

I also love drawing and writing. I’ve written this little book about a hungry fish who’s pretty too. There’s a mean octopus and a nasty shark in it. Mum makes a big fuss over it and she gets me to read it to her every now and again.

Now, my mum. I love her to bits and she’s my favourite person in the world, but I wish she wouldn’t yell at me sometimes. Last night she cooked a beef stirfry and she put capsicum in it. She knows I hate capsicum but she keeps putting it in food and making me eat some of it and then gets cross with me when I don’t. I carried on a lot last night and didn’t finish my dinner so I missed out on dessert. I like my dessert and I would have had an icecream last night but I didn’t.

I apologised to her this morning about my carry on. I think she likes it when I apologise to her. Actually I think all adults like apologies when I’ve been naughty and I’ve been naughty a bit lately. Don’t know if mum’s mentioned it, but I’ve been in a bit of trouble at school and the teachers are keeping a close eye on me at the moment. Mum’s also been talking to the deputy principal a bit and she’s also taken me to someone who asks me lots of questions and expects me to talk a lot to her. The first time I saw her I just answered her back but I’m getting used to her now. She’s actually ok.

I’d better go now and next time you visit this website, mum might have written something. She’s been really busy with me which is why she’s not around here so much.

It’s nearly 4.30 on a Sunday afternoon and I’d like to know who stole the weekend from me. Why is it that days off go like lightening?

Anyhoo – I know this time won’t come back to me but have a look over here to see a bit of what’s been happening in the last week or so.