At the beginning of 2007 I was ready for something to happen in my life. I felt like I’d been stagnating for a little while in my job and in my personal life. 2007 was going to be the year of changes for me. And changes there were, some good and some not so good. In summary I’d say the first half of the year stank but it improved greatly in the latter half. 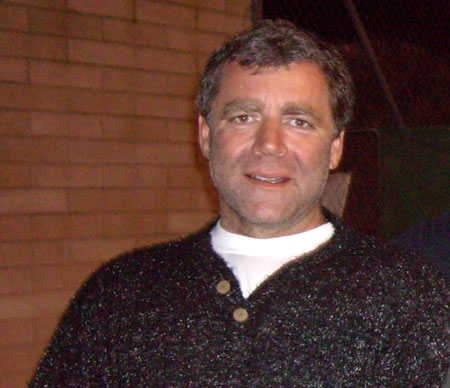 On 11 January my cousin (pictured above) was driving home and had a fatal car accident. I didn’t hear about it until the next morning and what a rude awakening it was. As you can imagine it was a huge shock for everyone and there was a massive turnout at his funeral. It was only a year earlier that our auntie died and I talked to my uncle (my cousin’s father) and we talked about the mortality of his generation. Neither of us expected it would be someone from a younger generation to go.

One good thing to come out of this is that I’ve been keeping in touch a lot better with his brother since the funeral. It’s largely left up to me to make contact but I figure it’s worth it.

In late February a woman I met while in the United States in 1991 came over to stay with her husband and three children. We’ve kept in touch since 1991 while I was living in London but haven’t seen each other since 1993. It was great to see her and meet her family but halfway during their visit my father had a stroke.

He’s recovered really well but gets tired quite easily and said he feels thick headed all the time. My grandmother had a stroke 20 years ago or so which eventually killed her but comparing the management of hers to dad’s I can see it’s come a long way. Dad was in hospital and rehab for a total of nearly eight weeks and he was determined to be able to drive again which he can.

I love this festival – Womadelaide. It’s in Botanic Park in Adelaide which is the perfect setting. Womadelaide is usually hot and the huge trees around the park make perfect places for some respite.

Also in March I started using Google Reader to keep up with my blogs. I used to manually check my favourites which is quite labour intensive. Now that I use a feed reader I can immediately see, and then read, updated websites.

During the time that dad was in hospital and rehab, I was seeing a psychologist for JJ’s behavioural issues at school, after school care, and with me. It had become quite stressful and I needed outside help. It was around April that all of this finally paid off. Since April or so he has not had a detention, no notes have come home from school and he’s generally been a lot more pleasurable to be around. Recently over Christmas two people commented on how JJ is so much more well behaved. I can only nod in agreement because he was a right little (lovable) shit there for a few months and I despaired that we would come through.

During May I was interviewed by a nine-year-old boy from San Francisco. He’s got Asperger’s, is home-schooled and he blogs. He’d put the word out that he wanted to interview people so I volunteered myself. Go read it for yourself. His other interviews are really good and he asks some great questions.

In late July I finally bit the bullet and purchased my own domain name for this blog. I’d been hosted at Typepad and using their domain, but now wanted to change. I wish I’d made the move to WordPress at the same time but I didn’t do that until two months later. Moving domains has effects on Technorati rankings and the like but overall it wasn’t too painful to get the ranking nearly to where it was.

It’s an honour to be on these lists (note that I’ve dropped off the top 100 Aussie bloggers list) and around this time I came across some fantastic Australian bloggers who have invited me and/or are joining me in a new Australian bloggers community announced yesterday. I am a forum moderator and will be writing blog posts for the blog being launched on 21 January. There’s some very passionate and knowledgeable people involved so I’ve a really good feeling that it will be a very useful resource for Australian bloggers.

Moving out of my comfort zone

Even though I don’t make new year’s resolutions, last year I knew I had to find some other interests outside of my immediate social circle. I love my friends dearly but had to do something for myself outside of get-togethers with friends.

The first cab off the rank was meeting some local Flickr’ites. I went to my first Flickr meet in September, another one in October, and the Christmas catchup in late November. I initially felt a bit intimidated because some people have the full on plethora of camera equipment and are quite serious but there were others like me who really like the art of photography but don’t have the digital SLR camera. I do want a digital SLR camera, however, as I used my sister’s on Christmas day and instantly fell in love.

Related to taking photos was me joining the self portrait challenge. I only got one challenge in before an end of year break but I look forward to doing more this year. 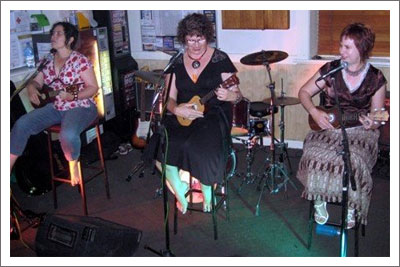 I also took my ukulele playing to another level by doing an open mike session with my two girlfriends. Then in November I went to a new local ukulele monthly group. I’ve since been to the next meet and plan on continuing this. As a group, we’ll be playing at the Adelaide Fringe this year which will be really exciting.

Conferences and a new job

Two cliches – It doesn’t rain it pours, and Be careful what you wish for. These were so true for me in the last few months of 2007 as lots of things happened and a wish I’d had about my work came true.

I had my performance management at work where I got really fantastic feedback and as a result was able to go to the Web Directions South conference in Sydney. If you’re looking for a web conference, I’d recommend this one.

Not long after I got back from this I got a phone call from some conference organisers who asked me to speak at a conference they’re organising. It won’t be nearly as big as Web Directions but it will be good practise for me nonetheless. I am getting there with my presentation and I’m feeling a lot more confident about it than I initially did.

Just before I went to Web Directions I was asked to do a six month secondment which I accepted. I asked for certain things like my existing four day work week, time off in January and a payrise which I got.

To recap, 2007 was a year of change for me. I’ve moved out of the stagnant pond and am peeking through the door to some great opportunities. I am really looking forward to the 2008 and developing further.

Happy new year to you all too.