You are here: Home / Parenting / Mum, you are the beast

I had to share this Christmas card from JJ to me. His writing has improved a lot this year but he still needs a bit of work in the spelling area. While I’m mentioning improvements I have to say how overall, he improved in the last school term of the year.

He’d been falling into all his old patterns of naughtiness and detentions at school and it was really driving me and his teachers mad. On the first day of the last term JJ told me he’d been to the principal’s office after a kid’s parents had been to see her about JJ. He also told me that he was going back to see her on the Friday.

I rang the principal the next day to introduce myself and to talk about his behaviour. Even though I’d had numerous chats with his teacher and made it clear that I want to work with the school in regards to JJ this mustn’t have been relayed to the principal because she said she was glad that we’d had our chat and happy that I wanted to work with them to help JJ.

The upshot of the phone call was a meeting with a behaviour management person from the Department of Education, the pastoral care worker from school, a special ed teacher and JJ’s teacher. We sorted out a student development plan for JJ where we came up with three really simple goals that he could achieve quite easily and he would be rated by himself and his teacher three times per day with 1 being not very good and 5 being very good.

The goals (and aims) were: 1. Put up your hand for help (to allow yourself and others to work without distraction), 2. Stay in your seat and on task until you have finished your work (to get more learning done), and 3. Start work when the teacher asks (to get a good start with your learning).

If he got good ‘marks’ then he was able to have a reward and JJ and his teacher came up with a list of rewards like taking his DSi in, extra time on the computer – that sort of thing.

Looking back over the charts he hardly got any 1’s but mainly got 4’s annd 5’s. I bore the brunt of his being good at school because he was tired of that when he got home and we had some doozies of tantrums. I’d been kind of prepared for it though and was willing to go with it if it meant good behaviour at school. I was also pretty sure that it was just an adjustment phase for him and that things would settle down at home too.

During the term we had two or three follow up meetings with Department and the school, and JJ was involved this time too. He admitted that it was a long time to be good for not much time getting rewards, but as we told him the rewards were much more than just a bit of time playing his DSi at school.

And they were. The rewards for him were a boost in self-esteem and no detentions at all in the last term. I spoke to his teacher on the last day of term and she couldn’t say enough great stuff about him. Things like he’d become a role model for the other kids. He’d be first in line or first sitting down when asked to. She said she was going to tell his teacher for next year to not judge JJ on his previous record, but that the slate should be wiped clean and this was a brand new kid going to start grade 3.

Because JJ goes to out of school hours care we had to start something similar there too. At the beginning of the student development plan JJ had had a really good day at school and then at after school care was really really naughty. He’d even said to them that he’d been really good at school and didn’t need to be good afterwards. Needless to say once we started an after school care plan he was absolutely fine!

We’re going to continue the plan at the beginning of the next school year just to reinforce the good work that was done in the last term and fingers crossed it works.

Anyway, back to my Christmas card from JJ. 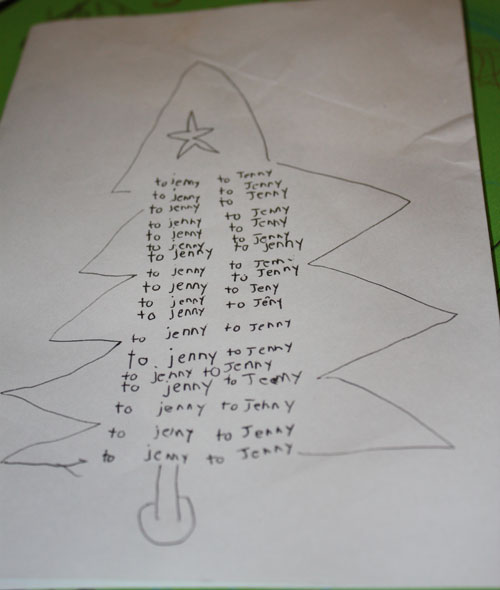 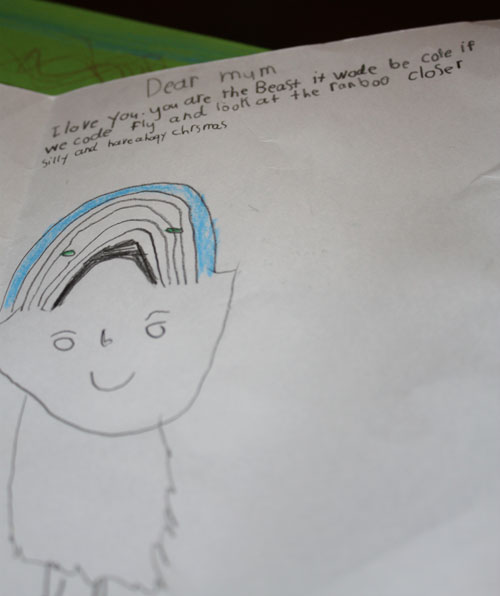 It says, Dear mum. I love you. You are the best (not beast). It would be cool if we could fly ad look at the rainbow closer – silly. And have a happy Christmas.

Bless him. I’m sure that ‘you are the beast’ is not a Freudian slip!