It’s been nearly a week since I wrote about Big Brother and I watched the daily show update and the Full House episode last night. Of course there were a few twists and turns which I will talk about here.

This year Big Brother has removed the three point twist. In more recent years whoever won the Friday night games had the power to remove three points from someone who was nominated. This has been scrapped this year and in its place the people in the rewards room can discuss who they want to nominate.

It appears Big Brother is becoming a bit more like Survivor and it will add some interest to Big Brother I think. I’m not a real Survivor fan or regular watcher but that show would be a lot less interesting if the contestents couldn’t form alliances, discuss who they want out, and completely lie to each other about who they would vote out each time. The new twist in Big Brother isn’t quite the same because it’s only the two people in the rewards room (while they’re actually in the rewards room) who can discuss nominations but it will add some interest.

If the reward room occupants are clever about it, particularly in the weeks to come when there are less people to vote for, they can wield some power between themselves to get people nominated. As Emma said on the weekend, she’s more interested at the moment in nominating people she doesn’t really like, like Kate, rather than thinking strategically about it yet.

To the White Room. The four occupants had been in there for six days and Big Brother obviously doesn’t want them hanging around for too long so he decided to give them incentive to leave. The incentive being money starting at $500. Nobody accepted this, so he went up to $750. I thought that we’d be there all night as he kept upping the money, but no, Cruz pressed the big red buzzer to get out. I think the White Room torture had got to him, because I could see that Big Brother would keep going up until one of them folded. Gretel Killeen even said as much.

After he left Kara starting uncontrollably sobbing. It was driving me nuts that she wouldn’t stop and I wasn’t even in the same room as her. If I was one of the other two people left in there, a slap on the face might have stopped her hysteria.

Other than that the secret relationships were outed. Three people guessed correctly that Andrew and Hayley were the couple but this wasn’t enough to get one of them evicted. As Gretel said, if they keep acting all lovey dovey then it won’t be long before one of them is evicted anyway. They applied as a couple in different cities so must have thought this would be the only way they could get onto the show. People are more desperate to get on Big Brother than I ever dreamed. I still don’t understand why. But then they get on the show and whinge about how hard it is to hide the secret. Doh!

Oh, and for successfully hiding the secret, and therefore passing the task they won $50,000 towards the prize pool. So there is prize money this year.

Lastly, I think TJ is out of control. She’s tried to crack onto Thomas and he’s rejected her advances and she’s just gone psycho about it. Obviously not too many people say no to her. Thomas has made it quite clear he doesn’t want to get involved with anyone in the house and any rational person would leave it at that but she’s constantly at him to chaneg his mind. I think she’ll be up for nomination for sure tonight.

Other nominations? Kate doesn’t seem too popular, and maybe Hayley or Andrew will be up because of the deception thing?

I love watching The Chaser’s War on Everything. It’s an Australian comedy/satire and as the title suggests they wage a war on everything. Nothing is sacred, including American politics.

On a recent episode one of the team were in the States trying to become Hillary Clinton’s intern. See it for yourself.

As I have mentioned a few times here lately I am a convert to reading RSS feeds in Google Reader. One thing that really bothers me is when these feeds aren’t shown in full in the feed reader. A recent MamaBlogga post talks more about RSS feeds and how to set them up for WordPress and Blogger blogs. I will expand on this for Typepad blogs.

When I first started researching RSS feeds, one of the first things I stumbled upon was Feedburner. Mamablogga talks about it too, but if you haven’t already I’d head over to Feedburner, sign up (it’s free) and then start Smartfeeding. Typepad and Feedburner have teamed up with a widget to make adding your Feedburner RSS feed easily added to Typepad using a Chicklet. Read more about it on the Feedburner website. Typepad makes it pretty easy to do all of this as you’ll see below.

Once you’ve done the Feedburner thing, you might need to check your settings in Typepad to see if you’re distributing the full feed or not.

On your Weblogs tab, click the Edit Configuration link for the weblog you want to edit, then click the Feeds link to open the Syndication setup page.

Select whether you’d like to provide a Weblog Feed. If this selection is enabled, readers will be able to subscribe to your weblog’s feed.

Select whether you want to provide excerpts or a full post. If you don’t select the full post option, people who subscribe to your feed will have to click over to your actual weblog to read the full post. Personally I don’t do this unless I’m compelled to. I’m more likely to read the whole post if it’s in the RSS feed.

This is how this page will look if you’ve done what I’ve written about above (click to view full image). 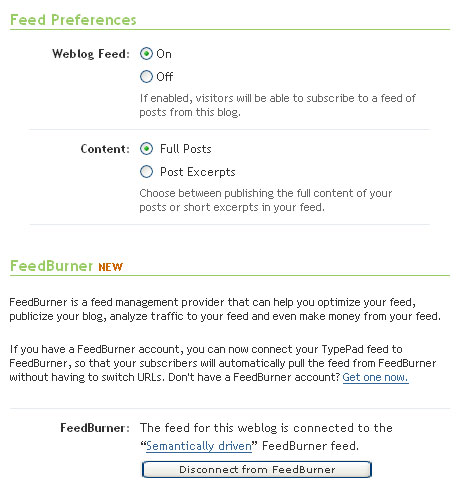 The other day I blogged about the ‘dance’ I went through to entice the rain. I am very pleased to say that it worked.

I awoke this morning to the nearly forgotten sound of rain and it’s been continuing ever since. It’s nearly 6pm and it’s still raining. There are supposed to be more showers over the coming days.

At the beginning of the tumultuous Big Brother tonight two out of six potential housemates are being voted in and surprise surprise, the blonde one is in front at the beginning of the show to get in (if I’m reading the graph right). They’re all telling us what fun they will be in the house and they’ll test all the boundaries. Yes, we’ve heard it all before.

First revelation: the much anticipated relationship. Hayley and the Firefighter (Andrew) are a couple but the rest of the house doesn’t know that. The couple’s high-stakes mission is to keep their relationship a secret. If they succeed they get to remain in the house as a couple. But all the other housemates are given a secret mission to try and find out who the couple is within a week.

The two new housemates are Susannah (surprise surprise) and Zoran and they enter the house.

The plan for the remaining four housemates is for them to go into the white room and they’re all dressed in, you guessed it, white. Of the four, the person who can remain in the white room the longest gets a wildcard entry to become a housemate. Sounds a bit like the final challenge in Survivor. If they want to leave, they can, by pressing the big red button but that will be it. It sounds like a form of torture to me. There is nothing in the room except for four beds and a table and chairs, and the big red button and each other. What fun that will be.

Now for Mr X – Billy – who used to go out with Hayley (the same one with the secret boyfriend in the house). Billy came all the way back from Canada to do this, interrupting a round the world backpacking holiday. Silly fool him. He’s to go into the house and put pressure on Hayley’s and firefighter’s relationship. Oooh, you big meddler Big Brother.

With all this excitement on practically the first night, what else could possibly be in store for us?

I got bored with my old weblog banner so I’ve created a new one. I read or thought of the old ‘So and So Bloggs’ yesterday and thought I would use it just because of the ‘Bloggs’ bit. It could be interpreted in two ways. That is ‘Jaycee – Bloggs here, and Jaycee Bloggs – here (the ‘-‘ used as a pause in these instances).

It’s particularly pertinent for me because I blog here fairly anonymously and Bloggs is the epitome of a pseudonym.

As I usually do when I update my blog template, I include a picture of the old one for posterity (click to view full image).

Okay I’ll admit it. I’ve been watching Big Brother Australia ever since it started here in Australia seven years ago. I tried to admit last year that I didn’t watch it, but I’ll let you in on a secret. I did. I was fairly disinterested, but strangely compelled to watch it.

Last night I watched the introduction to the new housemates. As I watched the first 12 go in, it struck me how much things have changed since the first few seasons. This year more than ever the housemates are really ‘outgoing’ and looking to have ‘fun’ and they were all pretty much focussed on themselves. I guess they epitomise Generation Y. I’m a Generation X girl myself so don’t really fit the demographic of the housemates, and all or most of the viewers, so there is a generation gap in place.

And as usual they are all youngish and attractive. Even Gretel said, as she was introducing the girls, that ‘it’s another blonde one’. Is this how shallow an Australian audience is, to only want to watch attractive people on television? What about beauty on the inside?

The seemingly most down to earth one was Jamie the self professed nerd although he is still brimming with self-confidence while he’s ‘doing it for the nerds’.

As for the two relationships within the house? I haven’t done any reading around other websites for the rumours, but my pick is that two of the girls are sisters. I saw them sitting next to each other last night and their profiles were almost identical. One was Hayley (the one in the awful blue dress that reminded me too much of the 1980s) and I can’t for the life of me remember the name of the other one. She was blonde though. That’s right, they’re nearly all blonde.

No doubt I’ll watch more and get ridiculed for watching it by my friends, but I really don’t care.