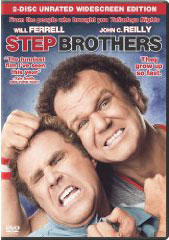 This is not a Brady Bunch type of marriage with the step children, apart from small arguments, getting along famously. Nancy (Mary Steenburgen) and Robert (Richard Jenkins) meet at a conference, are instantly attracted and get married. To their marriage, they both bring a son, one who’s 39 and the other is 40. They sons have lived at home all their lives and are complete losers. They act like spoilt teenagers and their parents let them get away with it.

At first I found it hard to reconcile men of these ages acting like some boys half their age. It just didn’t seem right. And there were definitely some very cringe moments like Brennan rubbing his balls on Dale’s drum kit. It’s just so silly that in some parts it’s quite funny and other parts had me cringing.

While I sat there watching it showed me that as a parent I am on the right track with setting up boundaries for my son. Neither of these boys had ever had boundaries set up for them and they and their parents suffered for it.

And then there’s Brennan’s insufferable younger brother, Derek (Adam Scott) who’s an absolute pratt. Although he’s more ‘successful’ in his life with a wife, albeit an unhappy and unsatisfied one, and two children, and wealthy to boot, he’s just not very nice.

I sat through the whole thing, and there were some bits I found myself smiling at. As someone who enjoys singing there was some pretty good singing, and also some very crude singing with their rap video clip.

All in all if you like really crude humour and lots of bodily function jokes, then this movie is for you.

And if this movie is for you, then Sony Pictures Home Entertainment have given me one to give away (well they’ll send it to the winner). All you need to do is leave a comment talking about a practical joke you played on your siblings or a time you were on the receiving end of a sibling prank.  I can’t wait to read these.

You’ve got till the end of February, ie midnight 28 February.

The DVD is for playing on Region 4 DVD players which means these countries: Central America, Oceania, South America, Mexico, Australia, New Zealand but my understanding is that some DVD players are region free. What I’m saying in, is you enter and you’re from another country I can’t guarantee the DVDs will work for you (provided you win of course).

Update: Thanks to all who entered. I’ll choose a winner by the end of tomorrow (2 March).