I have always watched with interest people starting and some finishing a photo a day challenge. I decided I’d do it once I got my new phone with web capabilities and I finally got it one week ago. It’s been eight days and I haven’t forgotten to take a photo per day yet. I’d just installed the app while JJ was writing a story. He’s right into writing at the moment. He even wrote something the other day and let me correct his spelling and re-wrote it. His spelling needs some work. This was taken on our morning walk and it’s at our local oval usually used for sport, but you’re still allowed to let your dog off the lead here so long as organised sport isn’t being played and so long as you pick up its poo and keep it under control. My dog is deaf now so if she wanders off and I call her she can’t hear me. I have to get in front of her face and wave my arms to get her attention these days. This was taken on my way to a seminar on North Terrace in Adelaide. I’ve taken a similar photo using my DSLR. I obviously didn’t take this one. This is on our morning walk yet again. We had our work christmas dinner the other night so I took a few using the Hipstamatic app (this is one) and some without. The iPhone 4 camera works pretty well – I like it. This is The Surfer near his camper trailer that he sold the other day. We showed the people who ended up buying it how to put up the tent part. I’ve only done that twice now and really can’t remember that well what to do so I pretended I knew what I was doing while trying to make it look really easy. The people who bought it seemed really nice so I hope they enjoy it. The Surfer has bought a camper van to use instead of this which is why he sold it. I ended up choosing this one for day 7 because JJ looks so so happy here. He’d been quite annoying this day after a really good day on Saturday… He was probably really happy because he was going to have his favourite fish and chips for dinner. We’d just been to pick up my sister from the airport.

And that’s my first week of daily photos. I’ll do an outtakes version  I reckon because there’s some other good photos that I didn’t choose for the daily photo. I couldn’t say what my criteria are really, but it’s partly a document of my day-to-day life I guess.

Have you done a photo a day project or point to people you know of who have? JJ hasn’t had a friend sleep over for ages so the other night his mate came over to stay. I know how these things work, you put them to bed and they stay awake talking for hours and you’re hanging to go to bed but can’t get to sleep because they’re still yacking.

Only it was different this time. I went in about half an hour after they went to bed and told them that it was time to roll over and go to sleep now – and they did. I couldn’t believe it. Mind you, they were wide awake at 6.30 the next morning but I was expecting that too.

The photo above was taken on our way to the playground the next morning. JJ’s mate said he didn’t have a hat and he said that this one would do, so JJ wanted to wear the other one. They’re perfect for the first amount of decent sun we’ve had this season. We brought them back from Bali as we thought they’d come in handy for dress-ups. So far The Surfer used one for a boys golf trip where he dressed up as a Chinese man but otherwise they’ve been lingering in JJ’s bedroom.

JJ had a go on this thing at the playground. The fact that he can get up there and stay on for even a little while is testament to his great balance. Check out those size 6 feet. Yes, he’s into adult shoes now. Soon he’ll be able to borrow mine. I really like this photo of him. He always climbs this tree when we go to this particular playground. He’s a great kid and we’re going through a good patch at the moment. Last weekend he was babysat while The Surfer and I went out for dinner with some friends. It’s been a while since we had some adult time without children and we must do it more often especially as JJ is always with me and we’ve got some more adult only outings coming up provided I can get childcare – not always easy.

It’s just over one month until christmas and no matter how much I’m in denial it will come. I’ve already had to organise one present for the work secret santa so I’d better hop to the rest. Christmas day plans are organised.

This week we had a bit of a hiccup with dad being flown over to hospital because he’d had a dizzy spell which was one of the symptons when he had his stroke nearly four years ago. He’s been in hospital since Tuesday and yesterday had his MRI. The results came back fine so he’s out today and will go home. Phew!

Here’s my tip for a christmas present if you know a Sound of Music tragic. 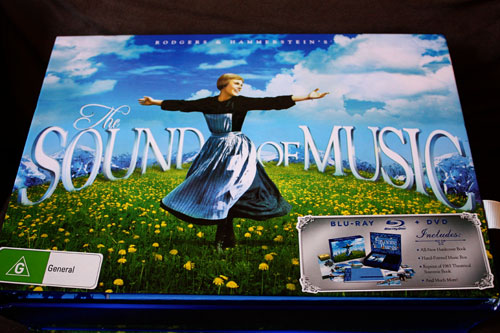 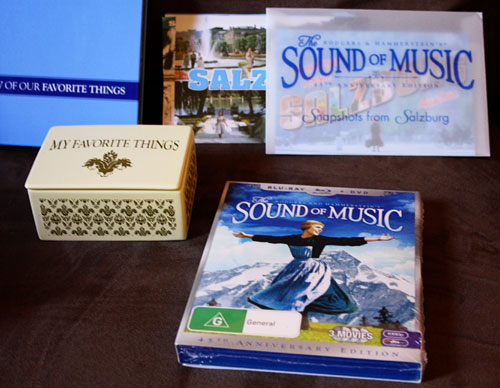 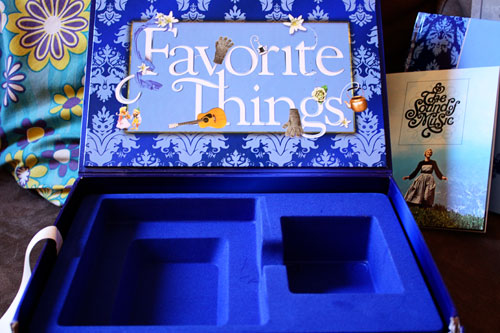 This week has seen my son read lots more during the week than he ever has in a week before. He’s been keen to read whenever he can and like his mum, wants to lie on his bed and read.

I’m so glad that he’s discovered the joy of reading as it will open up his world. It sure opened up mine. My first reading love that I remember was Enid Blyton and I devoured her books.

One day he might say to his children that his first love of reading were the Beast Quest books. He’ll even sit at the kitchen table and read some to me. The other night we got home from work and school and I was feeling quite down and tired so I laid on my bed and he read to me. I paid a bit of attention and corrected words that I could tell were quite wrong. I’m also trying to get him to spell words he doesn’t know out loud by saying the long sound, ie – ay be ce de ee ef, etc. He’s struggled a bit with this but is getting there now.

I’ll try to broaden his diet of reading in addition to Beast Quest but as I’ve heard it’s better that he’s reading anything even if it’s just the one author. He’ll branch out one day just like I did from Enid Blyton although that took me a long time as she wrote heaps of books.

I remember my friend’s daughter never used to like reading and Harry Potter got her going as I’m sure it has for many people. Actually I’m sure that in a couple of years JJ will love reading the Harry Potter books too.

What do your kids enjoy reading and are/were they reluctant readers?

He’s snuck off to his room – I bet he’s reading.

A couple of weeks ago when it was my birthday I organised for a friend to bring around a big eski (ice cooler) so people had something to put drinks in at my gathering that evening. As The Surfer and I were outside my son let my friend in and he came through the back room calling out, “Hi honey, I’m home!”. I replied with, “Hi honey, I’m out the back.” The Surfer also knows him and went to say hallo and when asked (jokingly, because they know each other) who he was The Surfer said he was the Man of the House.

I teased him about it later and he said that even though it’s not his house he was marking his territory or making his space because it had been ‘invaded’ by another man. I felt kind of chuffed that he felt he needed to mark his territory, ie me. As he said it’s a male thing like a dog weeing in a spot to let other dogs know that it’s been there.

I wrote this using three words I picked out as part of my life coaching exercise, ie man, house, space. As soon as I wrote them down I knew what little tale I was going to tell.

I’ve been fairly good with doing my nightly (four times a week) writing exercise but there have been a couple of mornings where I’ve woken up having completely forgotten to do it. I’ve a few rough drafts waiting in my blog to work up a bit so we’ll see how we go. I tell you what, it would be a good fallback if you were silly enough to to NaBlPoMo like I did once.