You are here: Home / Photography / Trying out a digital SLR camera Firstly, I wish I could say that I was trying out a DSLR camera I could actually keep. I also want to say that it’s my sister’s camera that I’m borrowing and not one I’ve been given out to try by anyone.

I own an SLR camera that I bought years ago, so it’s not the digital type, and because every shot I used went onto film which I had to pay to process I never experimented like I can with a digital camera. Since that SLR camera my first digital camera was a cheap Kodak 3x optical zoom which was kind of okay for two minutes but I wanted something with more zoom and more features and on impulse one day I bought a Panasonic 12x zoom. This camera has served me really well but I notice the lag inbetween photos quite often and I’d like more options available with different lenses.

Because a decent DSLR camera is costly, I thought I’d see if I could try one out, hence borrowing the camera from my sister. So I’m borrowing her Canon 350D.

Things I love about it:

I thought I’d dash outside this morning and take some photos using a different aperture setting. I’m finally starting to understand what effect this has on photos.

The lower the aperture setting is, the less of the image is in focus. This is fantastic if you want that depth of field, blurry background, or bokeh, as it’s called. I only learned that word a few months ago.

So I did some experimenting.

I took two shots of the same thing with different aperture settings. And this is the other thing about digital cameras I love. Back in the days when I used my non digital SLR I’d write settings down so if I particularly liked a photo then I knew how I’d taken it. As you can imagine that was very laborious. After taking the photos below I looked up the file properties in Photoshop and got settings from there.

This is the next door neighbour’s Jasmine which always grows over the fence into my place and desperately needs a prune. With this photo you wouldn’t necessarily know that because I’ve used an aperture setting of 5.0. 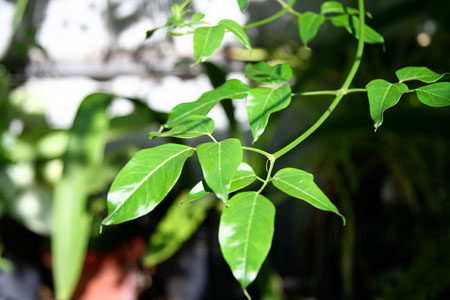 The photo below has the same subject but you can see more of the background because the aperture is at a higher setting of 29 and it’s easier to see how much the Jasmine has grown into my backyard from the next door neighbour’s and how slack I am at getting round to doing chores like this. Hmmm. 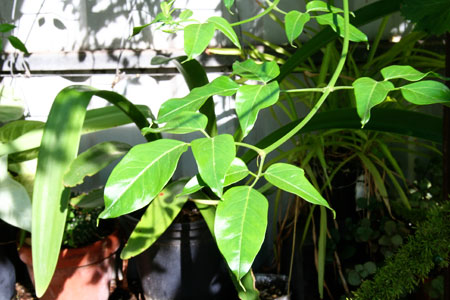 I did one more example, this time of the clothes line. Aperture setting was 5.6 and focus is on the peg. It looks like I’ve applied a texture to the background but I didn’t. 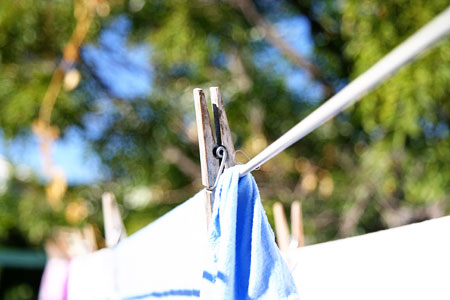 Here’s pretty much the same photo with aperture of 25. I find it all a bit busy and I don’t know what to focus on. 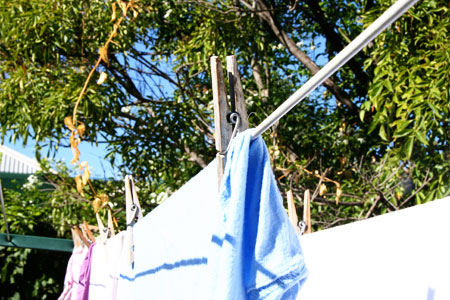 Below are some links to more explanations about aperture settings as I’ve explained it in really simple terms above without mentioning shutter speeds or focal length. I did, however, note that the smaller my aperture (or f-stop) setting, the quicker the shutter speed was. It’s something to do with letting the right amount of light in.

I’m enjoying using the Canon but before I fork out the money for one of these babies I want to try out other brands. When I bought my first SLR camera I spent two hours in the camera shop before I left it with my purchase. I’d say that’s what I’ll do when buying a DSLR too. Although winning one would be ideal.