The other night I went out for dinner minus the child and my sister looked after aforementioned child. When I got home she said there’s some stuff on the table that JJ might be interested in. One thing was a tiny little digital camera that can take 25 photos and has the resolution of about 1 pixel. It’s probably more than that, but not much. Apparently she got it with some catalogue shopping she did and it has no brand name on so I have no idea what type it is.

After I found a battery for it he snapped the 25 photos in about two minutes and they look kind of cool so I thought I’d share. First of all though, is a photo that I took of this little camera. 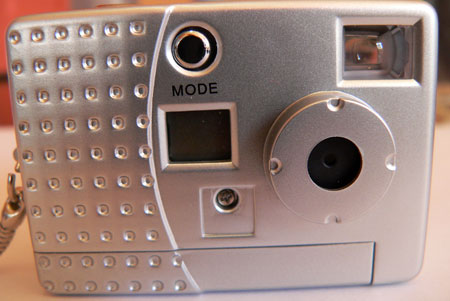 Here’s some photos that he took and they’re completely unprocessed. I just uploaded them to Flickr. « Talking the talk
It totally slipped me by »