I built a website for a friend recently – Papadave: not your average clown. I’m not sure why I agreed to do it. Okay, it was to help him out, and we worked out a barter system where I’d do his website and he would do some handyman jobs around the house for me. 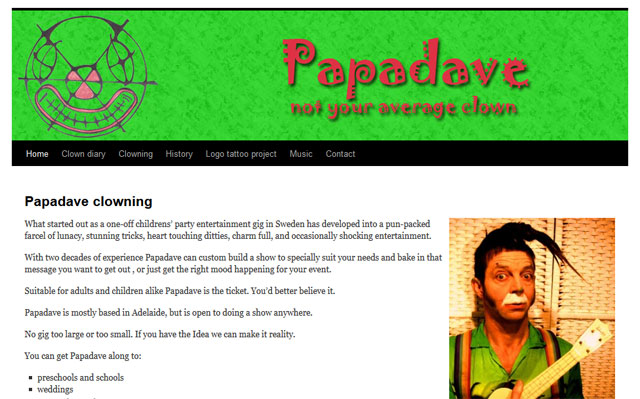 It was easy-peasy to create the website using WordPress but then I needed content to add to it. That’s where things stalled a bit. Plus, he’s an international clown and trips overseas took him away for months at a time.

I sat down with him and worked out what the aim of his website is, and what pages he might need. There aren’t that many.

Based on this I setup the shell of the website and sitting down with him, plugged in bits and pieces that we could do straight away. I showed him how to login to WordPress, open up a page and edit it himself.

This process would go back-and-forth for a while, we’d both get busy and then we’d sit down to get back on track again. When he wasn’t overseas that is.

His wife quietly reminded him to get on with it as well I think. And another friend of ours helped him out with some of the content. If I’d been doing this as an income earner and not as an adjunct to working, I would have been on his case a lot more and things would have progressed more quickly with a project schedule in place.

It finally got done and we turned off the old website.

Now I’m reminding him that his clown diary needs more than just one entry consisting of one line.

I know this is a common occurrence. Usually when people want a website they think of the design but unfortunately not so much about the content. When I’ve been asked to create websites for others since, I ask for a brief of what they want to include on the site. I’ve gone as far as asking for the content up front too.

Anyway, if you need a clown – not an ordinary clown either – in Adelaide, or anywhere you want him to be I can tell you that I’ve seen his shows more than once and I still get a kick out of them. And he’s scored a show at my son’s vacation care these upcoming school holidays.