So that means that I’m here sharing meaningfulness – ahem.

My son said to me before I went out that the world was going to end and that he’d rather spend the night with me. I felt a bit guilty about going out, but go out I did. I finished work for the year yesterday and even though I was tired I wanted to go out, catch up with friends and have a dance. I did all of those things.

I’ve got a great group of friends. I’m lucky.

While were dancing to Iggy Pop’s ‘Lust for Life’ a friend said to me that she wants that song at her funeral. Noted!

I was watching that show ‘Wedding Band’ the other evening and the band played at a funeral and everyone sang along. That’s what I want at my funeral – a singalong. It will be cathartic. I don’t know what song yet. Should I decide that or should I let my executor decide that? No, I should decide. One of my will’s executors likes Robbie Williams.

It’s been a whirlwind this last school term and I’ll be glad when Christmas Day has gone so that I can relax for a while before it starts all over again in the next school year.

JJ finished school last Friday and I had a great chat with his pastoral care worker. She said he’s showing some great leadership abilities and she doesn’t see him as much any more. Apparently he took her over to the library and showed her a book that he thought she could use with the other kids she sees. And she did use it.

I told her that JJ recently told me that he’s the alpha wolf in his group of friends at school. When I asked how he figured that out, he said he’s the leader of his pack. When I take him to school and go to his classroom with  him, I see his friends come and say hi to him and they’re really happy to see him. This is something that never happened until recently. He used to be the lone wolf, but no longer. 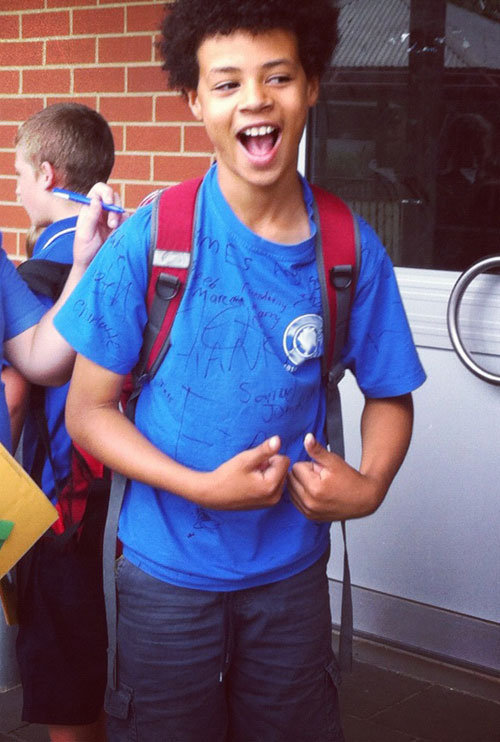 Kids often get their school uniforms signed when it’s their last day of school and before they move onto a new school. JJ is going back to the same school next year but still got his t-shirt signed. He’ll be wearing a slightly different uniform so I guess this t-shirt is now a keepsake.

I was pretty happy with his report too. The usual suspects of improvement in spelling needed, and the occasional disruptive behaviour were there, but otherwise it was pretty good.

I love seeing these changes in him as he grows up. But the physical changes are hard to ignore too. I bought him some new shoes the other day and I could fit into them. And he’s nearly as tall as me. He’s got two more years of primary school then he’ll whiz through high school and be an adult before I know it.

He’s learning how to play The Good, The Bad and The Ugly theme on the piano. I like listening to him practise this.

I’m glad the world didn’t end last night. There’s still lots more to do before it does – or before I do.

« Geocaching – a family activity
Catch up »