As my interest in taking photos ramps up I’ve noticed more websites about photography. Or is it just that I’m more focused on it so am noticing more websites about it. It’s like when you want to buy a new car, you all of a sudden notice everything about the cars on the road that you didn’t notice previously.

One site that’s come into my radar recently is Shutter Sisters. It is a new site and their philosophy begins by saying:

Shutter Sisters is committed to honoring and celebrating the beauty that women behind cameras can capture. We embrace the belief that we are all creative equals, eager to share with one another our work; our art. It is in that sharing that we thrive and grow not only in our creativity but in all facets of our lives.

Visit their site and see what they’ve got to offer. There’s also an associated Flickr group.

Another blog I’ve started reading recently is Confessions of a Pioneer Woman. She is a self-confessed amateur photographer but she’s done really well with a good camera, lots of practise and lots of experimenting. She offers layman, or laywoman, advice about digital SLR cameras versus point and shoot, different types of lenses for the SLR cameras and offers advice on post processing in Photoshop.

Looking at these sites, and I’m sure there’s lots more, just gives me loads more incentive to take more photos and one day get my own DSLR camera with a plethora of lenses.

School started back today. JJ made all sorts of excuses as to why he didn’t want to go and after a big long weekend I was very tempted to keep us both home today, but I didn’t. I went to school with him and stayed with him for a bit. He hid behind me, being very nervous and shy but his teacher helped make him feel at home by giving him something to do. Quite a few of this year’s classmates were in his class last year so they’re not all strangers. But one boy, his best friend, who was supposed to be in JJ’s class is not so I’m not sure what happened there. They still see each other at breaks though.

So now starts the book covering, the learning to how this new teacher works, paying school fees, and doing the reading and writing or whatever they have to do this year and trying to keep up with all the paperwork that comes home in the form of notes etc.

I also have my boarder, my nephew, back with me doing year 12 so it will be a full-on year for him I imagine.

The next couple of months will be very busy for other reasons here too. February is pretty much booked up with social events and then the Adelaide Fringe, Womadelaide, The Adelaide Festival and myriad other events are on in Adelaide. It all happens at once which is very frustrating for a person who has to organise childcare and doesn’t have limitless money. I want to go to Womadelaide and haven’t really devoured the Fringe program yet but no doubt will do something there. At least once I finish with the conference, which is next Monday in Sydney by they way, I will be able to relax a bit.

Some people that read this blog already know about my involvement with the Aussie Blogger forum. Now I’ve written my first post for the accompanying Aussie Blogger blog about Creating a blogroll from your Google Reader subscriptions. Hopefully this will be the first of many – I’ve just got to think of relevant material. As there will be a few people contributing to this blog I don’t have to come up with ideas all the time so this blog won’t suffer as a result.

I’ve been away for the last three days and tomorrow school starts back, so today will be a domestic goddess type day and a day of rest. As much as I’m addicted to blogging, playing Scrabulous and checking on emails etc I did not miss looking at a computer screen one little bit. I was greeted with the news this morning just as I walked into work that Heath Ledger had been found dead. This isn’t the type of news to expect as you get to work in the morning but death is shocking. Death is even more shocking when it happens to someone young, with a child.

HEATH Ledger has been found dead of an apparent drug overdose in a New York apartment reportedly belonging to fellow actor Mary-Kate Olsen.

Ledger, an Academy Award nominee, was found naked and unconscious in bed at the apartment in the trendy Manhattan area of SoHo by a housekeeper at 3.35pm (7.35am AEDT).

I’ve enjoyed watching movies that Heath Ledger was in, and now he will stay forever young like James Dean.

My condolences go to his family and to his poor daughter, Matilda. It’s that time of year when the basil is abundant. I always grow basil as it’s pretty easy to grow and I just love it. Basil can be used in salads – raw, and in cooking. I also love it as a base ingredient for pesto. As my basil was starting to flower I had to pick a lot of it to make into pesto. Because I’ve now trimmed my basil I’ll get more life out of the plants instead of going all woody. 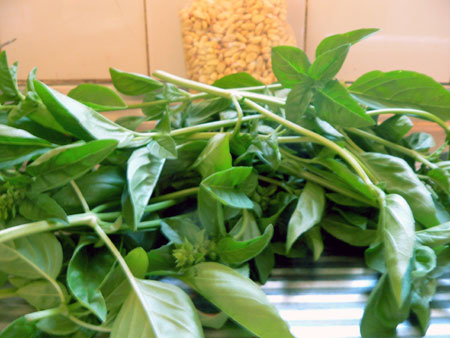 The first time I made this pesto I followed some recipe or other but now I know the base ingredients I just put them all into the ancient food processor I have to blend.

I don’t use set amounts but just keep blending and adding ingredients till it looks just about like pesto should. So that’s my really basic and bare-bones recipe.

If you’re after something a bit more precise and variations to the theme try this.

After I made my pesto I cooked up some pasta, put some leftover roast chicken and some of my fresh pesto and had a delicious meal. Mmmm, mmmm.