You are here: Home / Archives for lego 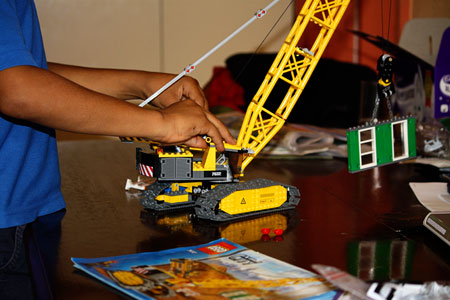 A little while back now we were sent some Lego to build and unfortunately there was a hiccup along the way because we misplaced a vital piece of the construction which delayed things somewhat.

After an  intensive web search a replacement piece was ordered and sent here.

Now we have a newly built Lego Crawler Crane in the house and we also know all the places to go to find replacement pieces.

You can read the whole three part series:

JJ and I have pretty much finished building the Lego City Crawler Crane. It’s definitely had its trials but it’s been a fantastic activity to do together.

Go have a read of Building the crane – part 2 and you’ll discover why what should have been the final post about this is now going to be followed by a part 3.

Lego will either fill you with dread or make you jump with joy. It astounds me as to how a complex piece can start off as a few hundred separate pieces and end up (hopefully) as an object.

We were recently sent some new City Lego to review and I’m documenting the process. Speaking of lots of pieces, it has 481 pieces. I hope we don’t lose any!