I don’t know about you but I never get tired of sunsets, especially sunsets at the beach.

Last Sunday week when it was the first day of daylight savings we managed to go for a walk along the beach after dinner, something which is a lot easier to do when the days are longer.

I loved how the sunlight was reflecting over the water. 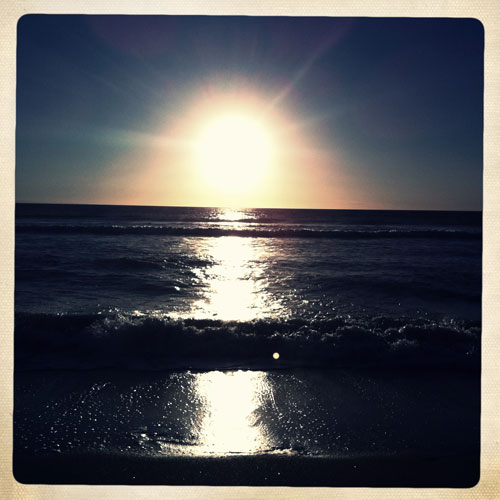 Monty is missing from this photo. She can barely walk to the end of the street and back. I really miss taking her for walks and it’s not that long since she could manage this walk. The decline in her fitness and endurance has been quite rapid in retrospect. 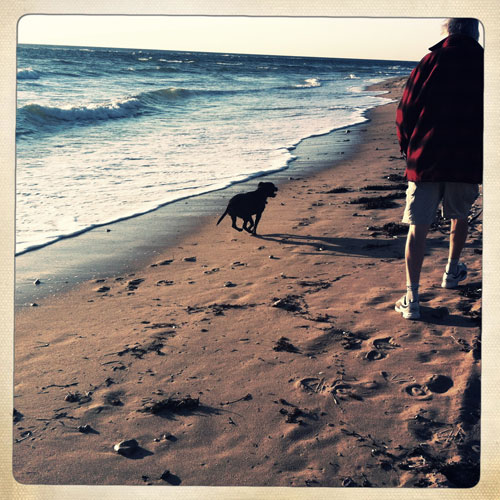 After a short stroll along the beach we walked through the sandhills. It’s very hard work even after the pilates I’ve been doing lately. 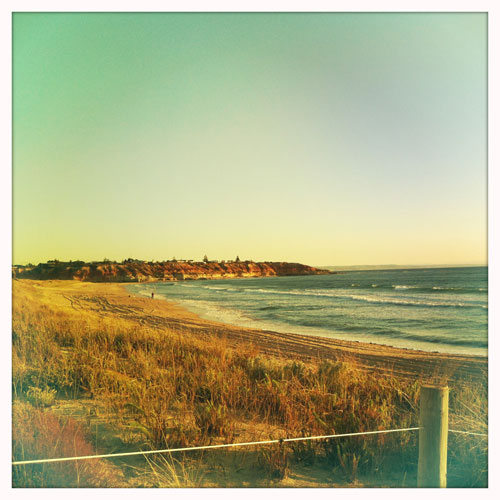 Therefore stopping to take photos is a very legitimate excuse to stop and take some breaths. 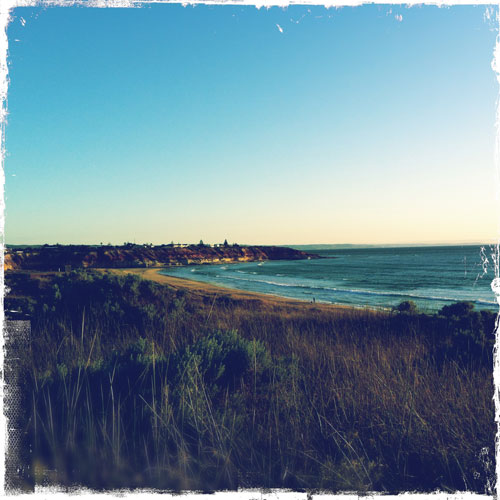 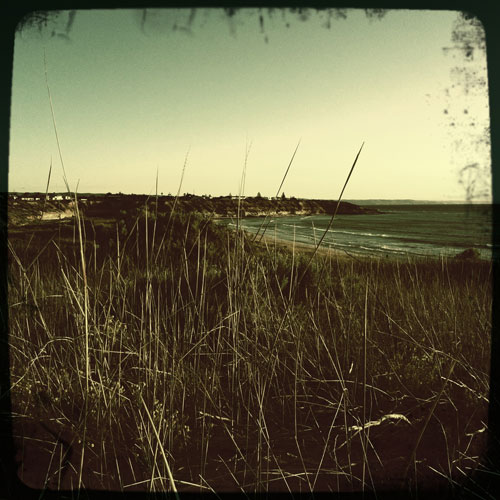 The photo below is unedited – completely unedited. That’s what a difference natural light can make, especially natural light at sunset. 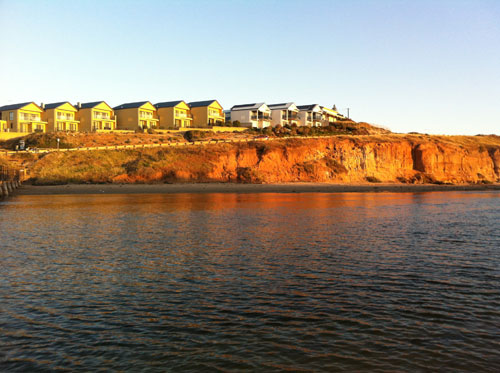 I love a sunset. And you? The lad started playing baseball on the weekend. He did a come a try session (well two) a few weeks ago and absolutely loved it so we’re joining the ranks of club sport for this one. It also means I’m losing my Sunday mornings to playing, Friday afternoons to training, and my hip pocket will take more of a hit as club sport is more expensive than school sport.

Having said that I’m noticing a huge difference in the two types of sport. Club sport is nowhere near as a casual as school sport but it’s not that full on that the kids feel inadequate. Quite the opposite in fact. On Sunday I was really pleased that all the parents there were really supportive of all the kids, and knew all the kids names. When JJ showed his hitting prowess one of the parents commented on it and when I said that he was dumping cricket for baseball he said that it was cricket’s loss. My parent feathers fluffed at this.

I don’t know where JJ gets his abilities from as I was never that much good at sport. I managed to play for the A grade tennis for my local tennis club but that’s because we were a very small club, only had a few members and many of the women chose those few years to get pregnant so I flew up the ranks by default.

Taking up baseball also means that because he’s halfway during his cricket season neither one of us wants to let the team down so there goes Saturday mornings too. And I’ve only got one kid to ferry around for all of this!

So he had a great game on Sunday even though he was off for half of it. He had a couple of turns with batting and was run out for his first hit but his second hit eventually meant a home run. I’m sure I held my breath when he was on third base but he made it and he reckons I had the quietest reaction out of everyone else that was cheering him on. But I was so excited for him. He was proud of himself too.

Fast-forward a few days a kid at school said to him that one of JJ’s team-mates said that JJ was wearing a Family Man baseball cap and looked like an idiot. I’m not sure if it was his school mates take or whether it was his team-mates. Either way it gave me the shits that it was even mentioned. He was only wearing a non-club baseball cap because he hasn’t got his club one yet and he chose it himself on one of our op-shop visits. Actually he has to keep pushing it down on his hair because his hair has grown and that in itself is just like a cap.

Luckily JJ didn’t take this comment too seriously as he doesn’t really like this kid that much (the school one) and we tried to think of some comebacks if it ever happens again. Apparently my suggestions weren’t that good. What’s wrong with ‘That’s not very nice’?

So, anyone got some good, age appropriate, come-back lines if this type of thing happens again?

When we went camping over the long weekend the nearby property has some great sand dunes on it. They’re just a short walk away from where we were setup and you can’t not go there.

JJ liked going off in his own direction. 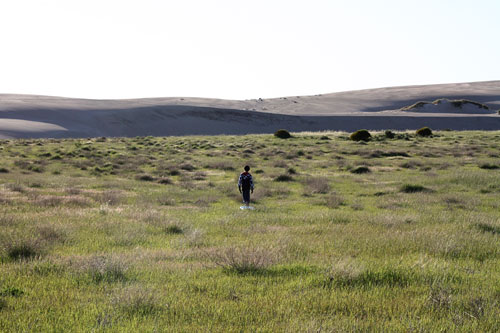 The rest of us followed the path. I wish I’d gone with JJ as we ended up where he went anyway. Those sand dunes are a killer to walk on. 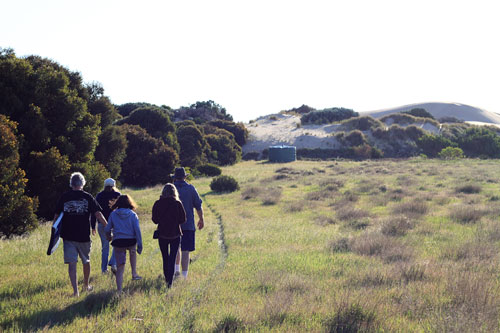 And the first hill we climbed was particularly steep. 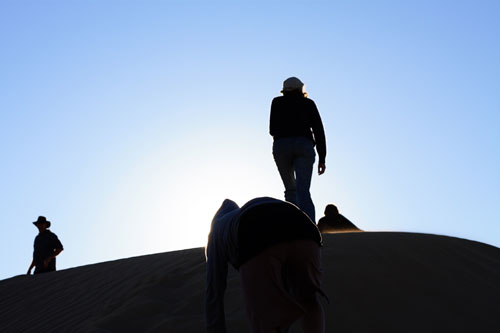 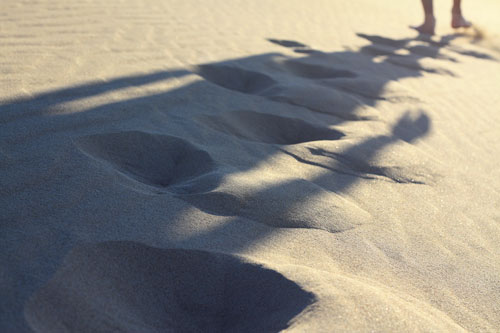 Once we made it up the first steep hill and tried a couple of slides we decided to try another hill. JJ knew the way so off we went. 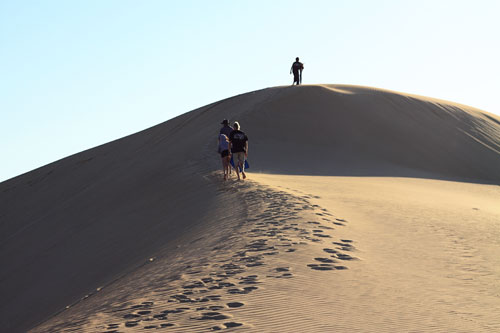 I loved the textures of the sand made by the wind. 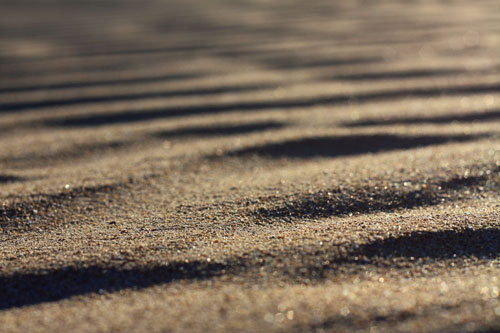 Finally we found the good hill to slide down. It wasn’t as fast as it might have been which was apparently due to recent wet weather. Sand is a lot faster to slide down when it’s dry. 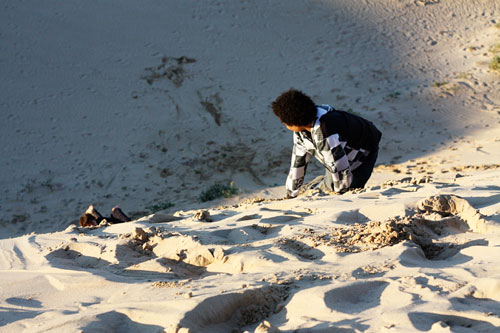 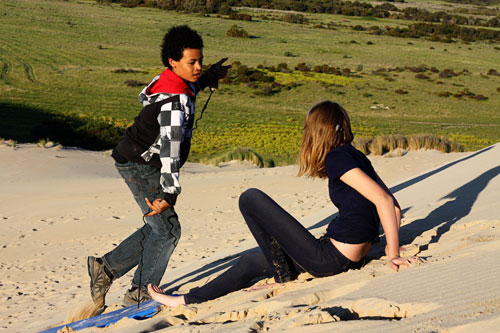 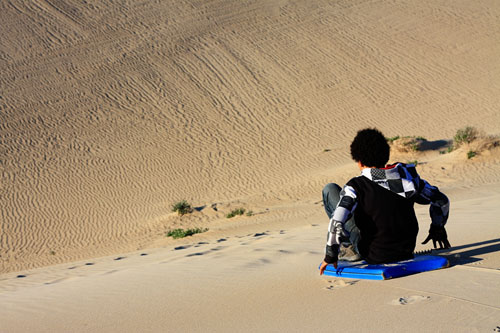 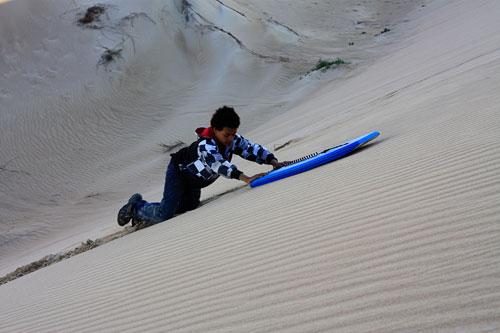 Looking back over to the property we were camping on. 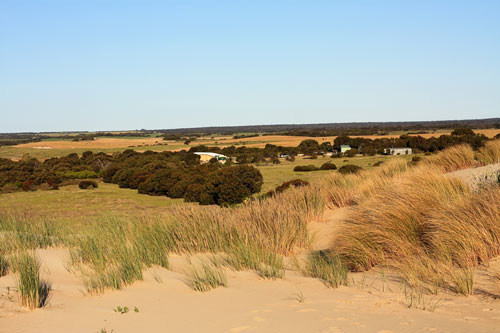 On the way back I looked down this hill and the textures here looked even more fabulous than just the wind-made ones. You could see where the water had run down this hill. 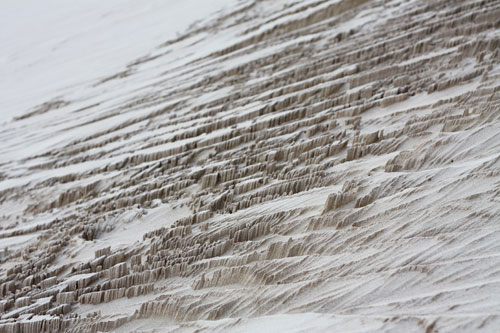 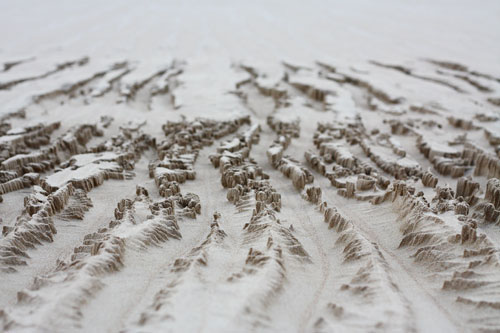 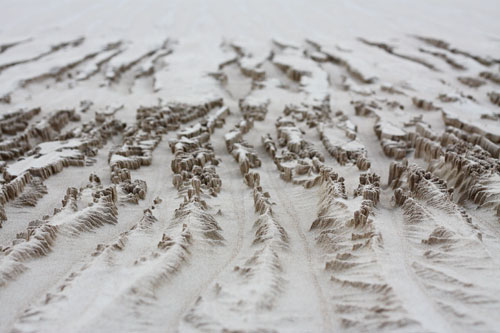 I only had my prime lens on the camera so couldn’t zoom into what you can see in the sky in the photo below. It was an ultra-light aircraft with a special birthday banner for the birthday boy whose property we were staying on. 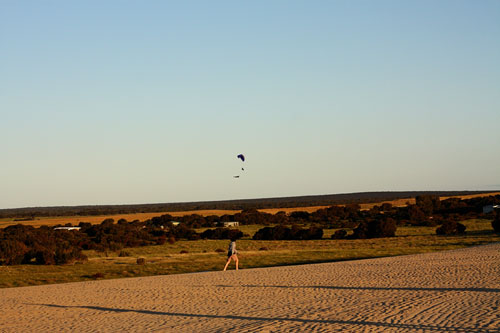 Linking up with Trish for – again – almost Wordless Wednesday. I’ve updated my RSS feed’s footer which you will only see if you are subscribed to my RSS feed.

Fear not if you’re not subscribed via RSS. It has a request to please update your RSS subscription to Semantically driven using this address:

I’ve felt the need to do this because I have been using Feedburner to deliver my feeds, and while I have a redirect from the above-mentioned link, I don’t know how many readers are subscribed using the actual Feedburner link. Feedburner is getting rid of its API service, whatever that means, and I’m hopping on the bandwagon incase it is finished up altogether.

So if you could please check and resubscribe if necessary I would be forever grateful.

Do you still use Feedburner? Do you care about RSS subscriptions?

One thing about being a blogger is having to rely on technology. It’s great when it works but when it doesn’t it can involve a bit of time to troubleshoot. Luckily I’m persistent and can work out most things myself.

I subscribe to my own RSS feed and noticed that it hadn’t updated since my Sensitive Tony post the other day. I was mucking around with embedding a Storify story and I think this made the feed too large and the technology that spits out my feed spat the dummy.

So I’ve found a solution on the WordPress.org help forums by “rcdiugun”:

If anyone is still having trouble with this thing, I finally solved it. It’s the strangest thing.

First, go to the setting of your syndication feed (under “Reading” options/settings) and make sure that it will only show one post.

Next, create a new post and publish it. Just a test post so that WordPress will generate a new feed. Once that is done, you can use feed URL with feedburner.

When feedburner has finally accepted your URL, go back to your wordpress install. Delete the test post. Set the syndication feed number to the value of your choice. 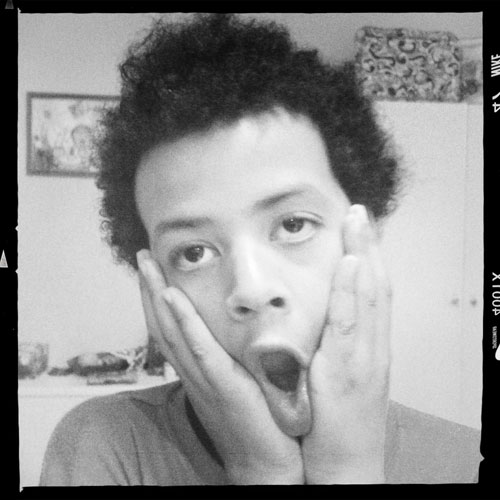 You wouldn’t think from these photos that he can be a bit shy sometimes.

I guess he’s just not shy around me because he knows and trusts me. 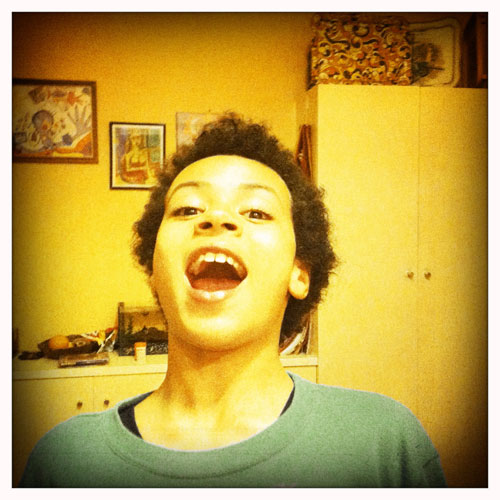 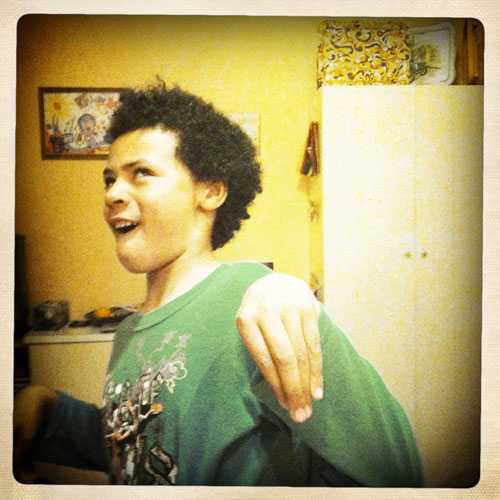 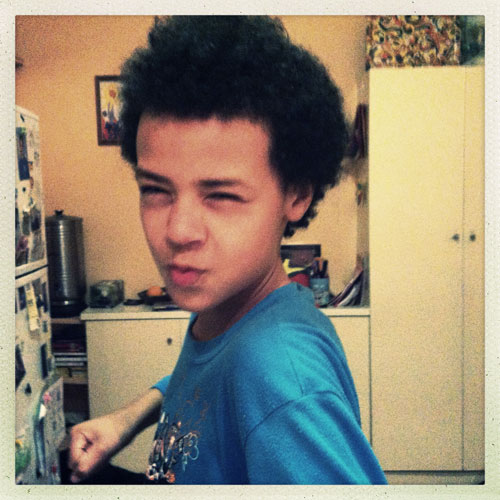 Whenever we see someone we don’t see that regularly they always comment as to how tall he is. He’s nearly as tall as me and I’m around 5’6″. He’s still only 11. Yes he’s gonna be tall.

He still goes through shoes at a rate of knots. Doesn’t matter how much I spend, they don’t last for him.Pajamas I bought for him at the beginning of winter are now two inches too short.

He asked me the other day if he could look at my website. I changed the subject. I will show him. Afterall a lot of this is just for him.

If you look carefully at some of the photos you’ll see a portrait of me that a friend did for me years ago. There’s another one that his head is hiding.

This is a story I created on Storify and automatically posted here. I would like to make it a bit shorter, so apologies for how long it is.