On Friday morning I heard him get up, go to the toilet and go back to bed. I lay in bed for a bit and then yelled out ‘Good morning birthday boy’. He came into my room and when I asked why he hadn’t come in earlier he said that he didn’t want to wake me. It doesn’t bother him most other mornings and his birthday is one of the rare days in the year that I don’t mind if he does wake me.

I gave him his presents and he read the card first. 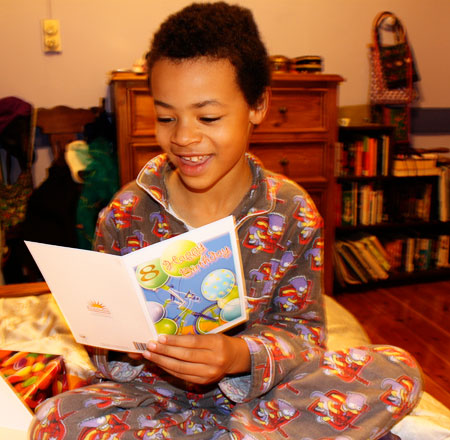 He then opened the main present. 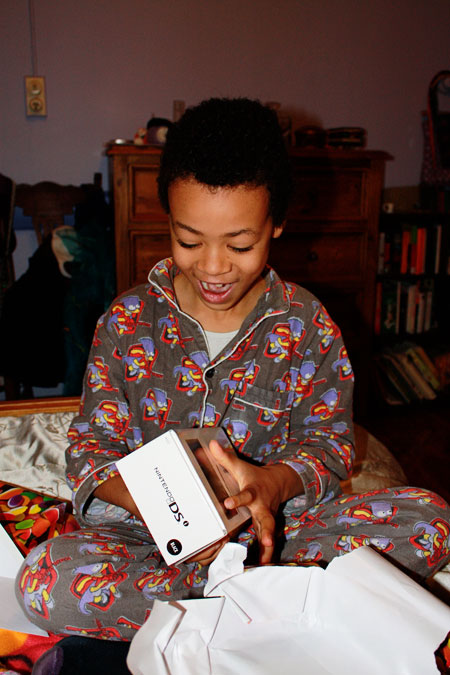 He then realised what it was. He’s been hassling me for a Nintendo DS for ages and I finally caved in. I even bought the DSi. 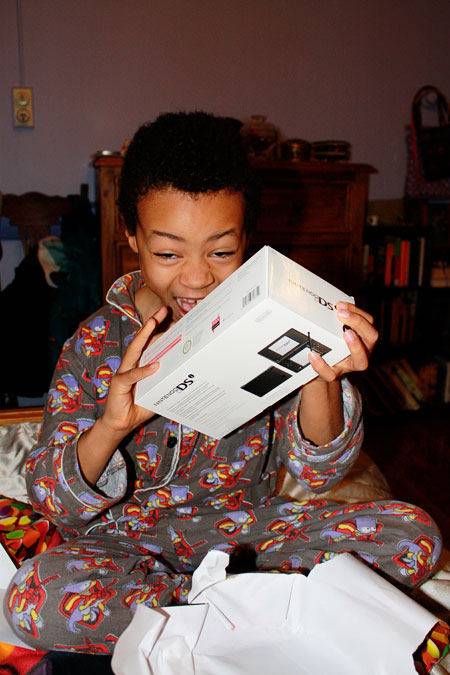 He opened the second part of the present which included a game. 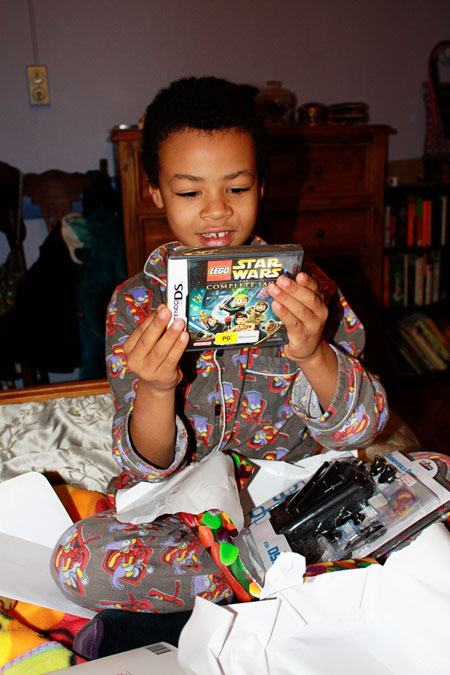 And before too long he was occupied playing it. I realise that now that he’s got a DSi he’ll be hassling me to play it all the time. It’s not one of those things that he can have whenever he wants and so far I think he accepts that. He asked me today if we can take it away with us, and of course we will be.

Just a small technical note about the DSi. It accepts an SD card so you can store music and photos on it. I would have expected that you could put the SD card into the slot and it would be recognised straight away like in a camera but this isn’t the case. You have to connect to the internet before the DSi will recognise it. I’m fairly technically savvy but I had a bitch of a time trying to connect it to the internet using my wi-fi broadband at home.

I’ve got my security setup with WPA and the default for the DSi is WEP – ie two different kinds of security. The documentation I found said that you could setup the internet with WAP security but damned if I could find it. The manual didn’t mention anything that I could find and then I finally (after nearly two hours) found that if you used connections 4-6 on the DSi you could select more than just WEP security. Finally I connected to the internet which I hadn’t really wanted to do anyway. I just wanted the thing to read the SD card. 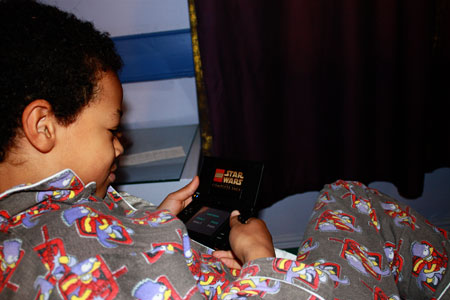 Nearly half an hour after they arrived I was still the only adult there and I was starting to freak out. My friends were supposed to be there for two o’clock and they were seriously late. One of the fathers offered to stay but he had to go on a quick errand before he came back. By the time he did come back my other friends had arrived but he still stayed.

We started off with Pass the Parcel which was surprisingly hard work. The kids (five boys) were really over-excited and very hard to control. It was JJ times five. Note Monty in prime patting position! 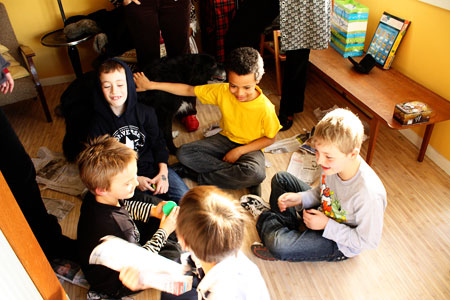 We then did musical statues outside which was great to get rid of some of that energy.

I found a game called Mummy Wrap on the internet and I really didn’t hold out much hope for this game because it required standing still. The boys paired up and had to wrap each other like a mummy.

To their credit they all did a really good job with a bit of help from some adults. 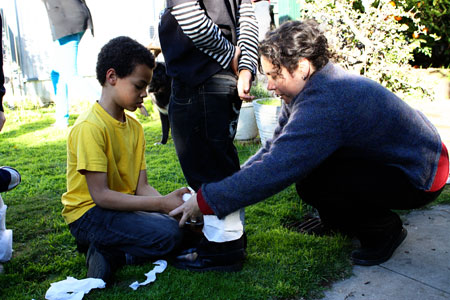 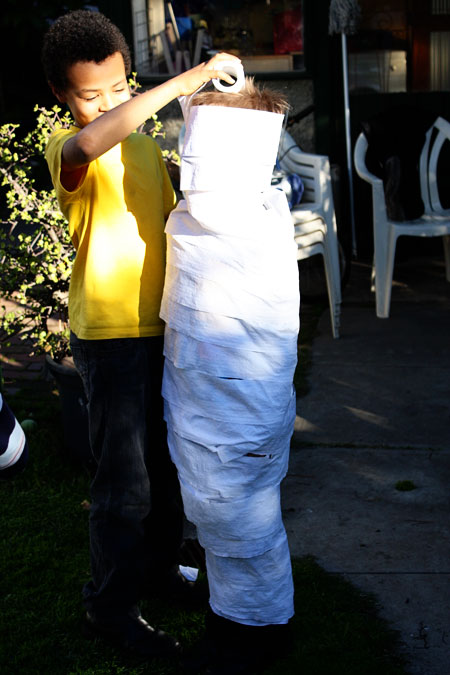 Here’s me directing some toilet paper pickup after the first round. The toilet paper I got came apart quite easily so it was a little bit hard not to rip it. 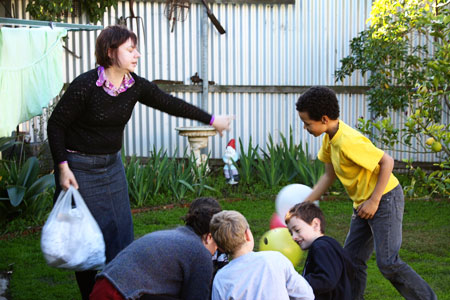 They then swapped and we judged the best wrapper, although they nearly all won a prize.

To get the toilet paper off they had to do star jumps. 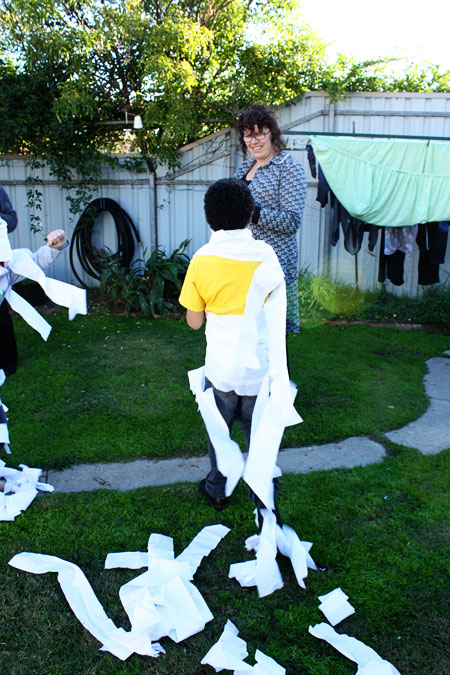 And then wrestle each other to the ground. 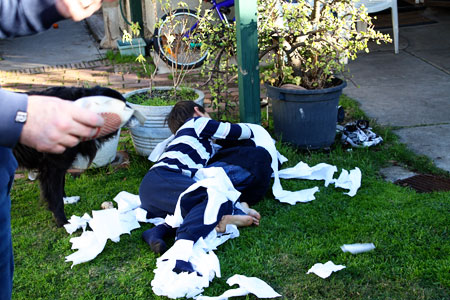 After some food, some more jumping on the trampoline it was time for the birthday cake. JJ wanted me to make my cheesecake (the Superb Cheesecake from the Quick and Thrifty Readers Digest recipe book). I bought some Smarties so the boys could decorate their piece. 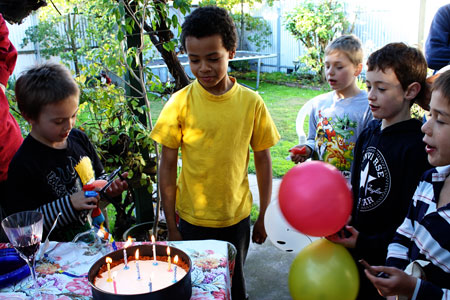